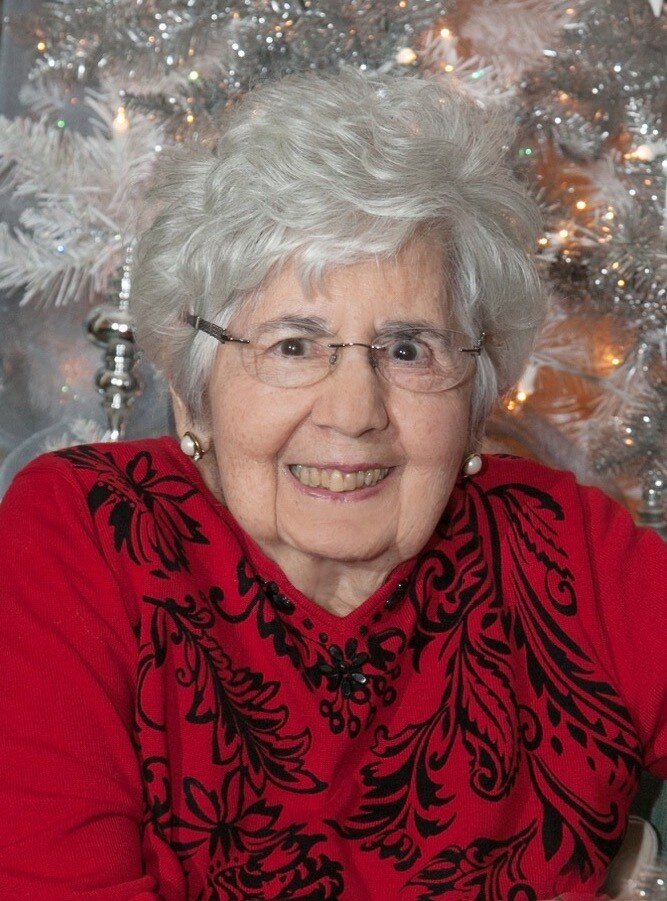 Christine Lemonopoulos Grabenstein, a longtime member of St. Jude's Cathedral, passed peacefully at her home in St. Petersburg, Florida on January 2, 2022 – a little more than a week after her 95th birthday on Christmas Day.

Christine graduated in 1944 from McKinley High School in Canton, Ohio.  The celebration was muted because it took place on D-Day.  With World War II raging, she felt called to a life of service and, to help meet the anticipated demand for caregivers during the war, studied at Western Reserve University in Cleveland, Ohio where she earned her registered nurse degree.

Fortunately, the war ended before she graduated.  During those college years, she met a young veteran and swing band leader, Thomas A. Grabenstein (his band was "Tommy G from C to C") who was studying chemical engineering at nearby Case University.  They married in 1949 and moved to Buffalo, New York where Tom started his career with DuPont.  Christine worked as a nurse until, starting in September of 1952, she gave birth to five sons over the next seven years.

DuPont transferred the family to Chattanooga, Tennessee in 1965.  Living on a mountaintop in Tennessee was very different from the snowy winters of Buffalo.   Christine always remembered the snake she found in her washing machine.

With her five boys growing up, Christine went back to nursing part-time at Chattanooga's Memorial Hospital.  She was also very active at St. Augustine Roman Catholic Church on Signal Mountain, Tennessee.

In the early 1980s, she started taking care of her ailing mother, Vasiliki Lemonopoulos, in Tennessee.  When her husband retired, they all moved to St. Petersburg, Florida where Christine took care of her mother until Vasiliki passed away.

Christine and her husband spent many happy years traveling, biking around St. Pete, and enjoying the arrival of their ten grandchildren.

Christine was pre-deceased by her husband and her brother Costas (Gus).

She is survived by her five sons, Tom, Jeff, Chris, Steve, and Bill and their spouses Carolyn, Diane, J.J., and Sarah.

She had four great grandchildren: Zachary, Tessa, Mia and Abigail.

Christine enjoyed speaking Greek with many relatives, including Sylvia Stratis and all her Hionides, Delianides, and Savides cousins.

In her final years, Christine was fortunate to receive excellent care in her own home from Bridgette Prince, Magdalene Holmes, and all the members of her loving caregiver family.

A graveside service will be held on Saturday, January 8 at 9am in Royal Palm Cemetery- South, St. Petersburg. Live streaming will be available at DavidCGross.com.

In lieu of flowers, her sons suggest that charitable contributions be made to the Immaculate Conception Haiti Fund, a medical ministry actively supported by her son Tom and his wife Carolyn.  For more information or to make a donation, visit stjuleshaiti.com