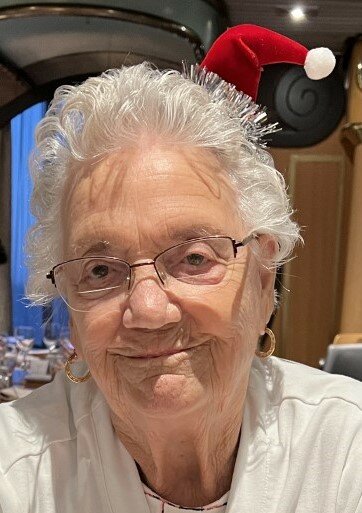 Here we are, at the beginning of the end of the life of a woman that u could only described as legendary!

To say that Doris was special is quite an understatement and almost an insult to the life she lived for all of her 89 years here.

She was a spit fire that made the most of everything she had in her life and made sure to live that life to the fullest! Nothing in her world came easy and she always had to work hard to get to where she wanted to be, but, in the end of those years she was there, right where she wanted!

She had a life story like no other and one that came with awesome stores and adventure that most of us could only dream of having!

Doris had a strong family and they loved one another a lot, but she was born during the depression and like many children had to be displaced for a while with friends and family and others while her mother and father continued to work hard to rebuild and bring their children and family back together! And boy did they do that cause in all she ended up with 2 more siblings afterwards..Yay!

She work hard at jobs and odds and ends through out her childhood and on the family farm but she also made sure to put in the work at school and got her high school diploma.

While in school she had the fortunate luck to meet the love of her life Clayton Charles Russell who made her his wife when she was 17 years old. After which they began a new life and chapter in their lives. After Clayton joined the Navy they did some moving around.

Doris did quite a lot of different things in her life some extremely important things to her like becoming a writer for the Chicago Sun Times which she enjoyed so very much because writing brought her joy! But she also had the chance to work for Chrysler a history making company doing a few important jobs like a key punch operator and secretary for the head of the company, in a day when the secretaries were the backbone of the company and the wind that kept them flying high! She truly got the chance to be a player in many different aspects of life in her time with us.

After some time in her marriage she did find that motherhood would not come easy if at all for her which was heart breaking but that did not stop her from having the chance at motherhood. She did not stop till she was blessed with the adoptions of two beautiful children! First a bouncing, smiley, and beautiful little girl then a handsome yet mischievous little boy! And what a mother she made. At wifehood and motherhood she was unmatched!

As her life progressed she had her ups and down. She definitely suffered but more then that she was blessed in life and found a lot of happiness and joy. He husband and herself did own and run quite a few small businesses that were quite successful and gave them everything that they needed to have happy and beautiful home and family. She travelled a lot and got to see many places around the world. They were a happy young family with many opportunities in their future.

When finally came Foxx Pools and home in York, Pa! Not long after they settled in Wyndom Hills and the kids graduated she found herself a grandmother. Her daughter gave her two beautiful grandchildren a little girl (sugar and spice and everything nice) and little boy (worms and snails and puppy dog tail)! And once again she was unmatched at being a grandmother! Doris was a avid seamstress and made costumes that won prizes for many years for children and now grandchildren. She was second to none in her sewing and creativity and never lost at any competition where her skills used to create new people places or things, again unmatched at all she did!

But life was not always kind and she found herself broken and betrayed by the man she loved, so she decided to not fall into pity and depression and to find her own way and in that find her own self! And boy did ever find herself and the life she would find to be the very best of her!

She packed up her life and family that she loved and cared for allure life and headed for her new home and life in St. Petersburg, FL!

There she built a new safe place for herself and that family and became who she wanted and lived her best life, the life that she chose herself! In the beginning of that life altering move nothing came easy at all and she and her family had to work hard and work many different jobs (ones she never thought she would have to do and some she never thought she’d do again) very hard for years till her dreams started to take form!

She ended up right where she was mean’t to be! And in time she finally had the the dream in full form! And that was what she would tell everyone. She found a home there and friends in numbers that couldn’t be counted and other family who soon came to join her there in her paradise home that meant so very much to her. She gave strength to the family and kept fighting to find her own happiness the whole time.

She was such a wonderful woman she didn’t just love and care for her own kids and family either, not long after finding herself with all grown kids and grandkids she began giving others a home away from home to many other people who were coming over to our country to learn snd explore! She became the number one requested home available in the exchange student program at Eckerd college. She not only was the best of the best at being a mom and wife and grandmother but she even transcended country and language to make many friends and even considering many to be as close as family. She stayed in touch with every one of then til the very last.

And when she thought he could not ask for anything more in her life she was blessed with her new Joy in her life, Lydia, her GREAT GREAT Granddaughter. And from the first day was filled with nothing but joy and unconditional and unquestionable love!

She was her final blessing in her life of family and grateful to have been in her world!

The gift of a new grandchild to love and adore gave her such a feeling of completeness! She had all that she ever wanted in her life now, and was prepared to live the rest of her life in her little condo and being surrounded by many friends and the blessing of family.

To know Doris Elaine Russell was a blessing but to know her was also to love her and to have unconditional love and friendship and much more.

She was an avid reader and loved to write if only for herself. She also enjoyed traveling and spending time visiting with past students and many of her friends around the world. She loved to visit family and attend all weddings parties and graduations etc.... And with that she loved to spoil her grand, great grand, and great great grandchildren while spending all the time she can soaking up their smiles and laughter. She was very active in her life and enjoyed all her independence. She was an exceptional and remarkable lady and no one could ever compare to her in anything! She was the very best of us and the cement that held this entire family together.

With her passing she has left behind in life a exceptional daughter, Margaret Mary Stevens and lovingly buried her son, Edward Charles Russell to soon! Also she leaves her loving granddaughter Margie Fae Malachowski and grandson Shaun Colin Aldridge-Sears, great grandson David Nathaniel Allison, great granddaughter Sarah Henderson and last but not least her joy and smile itself her great great granddaughter Lydia. Doris did so much for so many that it was impossible to count her friends. And to even try to begin the list of family that she left behind outside of the immediate would be impossible so all I can say is that many will miss her and mourn her for a lifetime. She will be forever loved and never forgotten! Daughter, Mom, Nana, Grandma, Sister, Aunt, Cousin, and Friend...whatever u are called be whomever loved u at that moment u are the best of us all and we love and miss u terribly forever and a day!

To send flowers to the family or plant a tree in memory of Doris Russell, please visit Tribute Store

Share Your Memory of
Doris
Upload Your Memory View All Memories
Be the first to upload a memory!
Share A Memory
Send Flowers