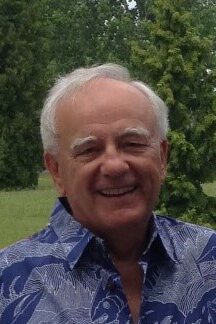 Richard Kenneth Funk “Dick” passed away peacefully on April 25, 2022, in St. Petersburg, Florida surrounded by family. Dick was 85 years old, born on December 16, 1936, to parents Rose Marie and Kenneth Funk in Cleveland, Ohio. The family later moved to Parma, Ohio, where they resided and established the family supermarket.

Dick loved baseball and was a standout pitcher at Parma High School, the Cleveland Sandlot leagues, and Baldwin Wallace College. He remained a lifelong Cleveland Indians fan. He was also an avid golfer, always speaking of his beloved Pine Hills. He enjoyed the fellowship of his golf buddies and the challenge of the game well into his final years.

Dick married the love of his life, Sally Barrett, in 1956, enjoying many loving years together. Dick and Sally raised four children, three daughters and a son. He deeply loved his wife and children.

Dick became known in the community as a hard-working and honest businessman, initially as co-owner of the grocery business, Funk’s Foods, and later as the sales manager for Dairymens Dairy. He was an active member and past president of the Ohio Retail Food Dealers Association and a member of the Cleveland Food Dealers Association, receiving several recognition awards for his service to the industry.

Dick and Sally enjoyed golfing, fishing, and socializing with neighbors and friends during their retirement years in Apopka, Florida. Dick shared his talents and love of God with the United Methodist churches he attended throughout his lifetime in Parma, Ohio and Apopka, Florida.

Dick was preceded in death by his parents, Kenneth and Rose Funk, and his wife Sally Funk.  He is survived by his daughters, Jeanne Wyatt, Sue Funk, and Carol Lutton, and son John Funk (Kim Scott), seven grandchildren, brother Robert Funk, and sister Lynne Sallot.

A private family service will be held at a future date. In lieu of flowers, the family suggests donations to the Alzheimer’s Association at www.alz.org or to Suncoast Hospice Foundation at www.suncoasthospicefoundation.org.

To send flowers to the family or plant a tree in memory of Richard Funk, please visit Tribute Store