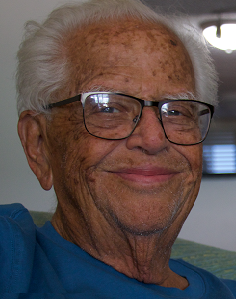 “I had 65 years of being married to the sweetest guy in the world. They just threw away the mold when they made him, and I hope my children are able to become that same person.”

Lawrence Martin Irwin was born on October 5, 1931 at Beth El Hospital in Brooklyn, New York. As the son of Jack and Lee Itzkowitz, Larry grew up in his family’s butcher shop, Wertheimer’s, with his siblings, Elaine and Howard. A graduate of New Utrecht High School, Larry was an accomplished ping pong player, skilled bowler, and a devoted member of the social athletic club, The Crescents. In the Air Force, he served in the psychiatric ward in Swindon, England during the Korean War.

Shortly after returning to New York and continuing his studies at Brooklyn College, Larry’s sister introduced him to Myrna Sonn at a Young Democrat’s Dance. After his father’s health declined, Larry left school to begin working full-time at Wertheimer’s, and he and Myrna married on December 22, 1956. They brought three children into the world – Steven, Kevin, and Eileen – and changed their last name to Irwin to avoid discrimination he faced during his time in the military.

In 1969, the day after the moon landing, Larry and Myrna packed up their life in a black Oldsmobile and without a house or a plan, moved from Belle Harbor to St. Petersburg.

First finding a job with Snelling & Snelling, Larry bought into a local tile store.  He became the owner of Tile Masters in 1973, growing it through the addition of carpeting, paint and wall coverings.  After they sold the business, Larry built a successful career selling insurance for Blue Cross Blue Shield, retiring with Diamond Club status.

In 1989, Larry and Myrna moved into their condo at Envoy Point, where they’ve spent the last 32 years. Over the years, Larry developed his routine and became the contagious smile of the community. He loved swimming his daily laps in the pool, getting “kosher” in the ocean, spending time with his nine grandchildren, and playing poker on Wednesday nights.

Toward the end of his life, Larry became the face of Envoy Point, and would sit in the front lobby of his building to greet everyone who walked by.

Ultimately, Larry was a lover of a good pen, a day at the races, his family, and his best friend and life partner of 65 years.

Larry is survived by his wife, Myrna, their children, Eileen Riley (Jim), Kevin Irwin (Karen), and Steve Irwin (Andi); their grandchildren, Jillian, Jesse, Olivia, Madison, Allison, Lincoln, Jason, Rose, and David; his siblings, Howard Itzkowitz (Carol) and Elaine Wolstein (David); their grandcats and dogs, extended family, and all those who were fortunate enough to spend a moment with him.

The care of Mr. Irwin and his family have been entrusted to David C. Gross Funeral Home in St. Petersburg.

Share Your Memory of
Lawrence
Upload Your Memory View All Memories
Be the first to upload a memory!
Share A Memory
Plant a Tree