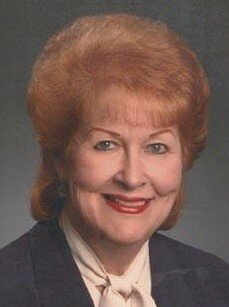 It is with profound sadness & with broken hearts that we share that Jean Giles Wittner (Mema, Grandma Jean) of St. Petersburg unexpectedly left to join her beloved husband, Ted P. Wittner, with the Lord on September 2, 2021.  Born in Atlanta, Jean moved to St. Petersburg at a young age and graduated from St. Petersburg High School.  Upon completing school, Jean spent her adult life as a businesswoman, teaming up with her husband in numerous business endeavors. Much of her career was in banking, having started as a switchboard operator and progressing to President of St. Petersburg Federal Savings & Loan Association beginning in  1975 through its conversion to Centerbanc Savings Bank and subsequent sale in 1987. Later, Jean and Ted founded Colony Bank which was sold to SouthTrust Bank in 1992.  Jean was also active in Ted’s many other businesses, which included insurance, third party administration and property development and management. Jean’s business acumen helped break glass ceilings before the term was even known, and resulted in her serving 25 years on the board of directors of Florida Power/Florida Progress, now Progress Energy/Duke Energy, as well as a director of Raymond James Bank.  Among her numerous awards were election to the Pinellas County Business Woman’s Hall of Fame and Tampa Bay Business Hall of Fame.  Jean was also a giver, having actively been involved in the community for her lifetime in both civic and social service organizations that are too numerous to list, and having served in leadership positions in many of them.  Some additional notable firsts for Jean were her service as the first woman Chairman of the St. Petersburg Chamber of Commerce and the United Way of Pinellas County, and being a founding member of the board of the St. Petersburg Downtown Improvement Corporation. Jean was most passionate in her support of education.  She served for decades as a board member of the University of Florida Business Advisory Council, as a board member and past Chairman of the Pinellas Education Foundation, and served for over 25 years on the Board of Eckerd College in St. Petersburg.  In connection with her involvement with Eckerd College, Jean provided scholarships to numerous individuals who may not have otherwise attended college. Jean loved and was (is) loved by her extended family. As the matriarch, Grandma Jean was always a source of love and wisdom, and will be dearly missed and lovingly remembered. Jean is survived by her three children, Jim Giles (Linda) of Jacksonville, Pamela Wittner LeCompte (Morris), Sharyn Jacobson, 8 grandchildren, Stephen (Charlene) Giles, Sarah Giles, Todd Jacobson, Marc Jacobson (Lisa), Carrie Killeen (Sean), Samuel Green, Brad LeCompte, Greg LeCompte (Keirsten), 6 great grandchildren, Justin, Jordan, Eric, Ethan, Casey, Annabelle, her sister Mel Stern (Elliott), and her kitty, Prissy.  The family would also like to recognize two of Jean’s dear friends, helpers and confidantes that are considered family, Cynthia and Marlene. Jean possessed deep religious beliefs and passed away in peace with love in her heart and the Lord’s spirit in her soul.  Congregation B’nai Israel and Starkey Road Baptist Church are particularly thanked for the teachings and comfort they have provided to Jean over the years.   While Jean was thankful for all of her friendships and associations over the years, in light of the current Covid crisis, the family has decided on a private family service.  In lieu of flowers, those wishing to recognize Jean are requested to make a donation to their own favorite charitable or religious organization, or one of such organizations Jean was involved in. God Bless.

The care of Jean and her family has been entrusted to David C. Gross Funeral Home in St. Petersburg.

To send flowers to the family or plant a tree in memory of Jean Wittner, please visit Tribute Store

A Memorial Tree was planted for Jean
We are deeply sorry for your loss ~ the staff at David C. Gross Funeral Homes & Cremation Centers - St. Petersburg
Join in honoring their life - plant a memorial tree

Share Your Memory of
Jean
Upload Your Memory View All Memories
Be the first to upload a memory!
Share A Memory
Send Flowers
Plant a Tree