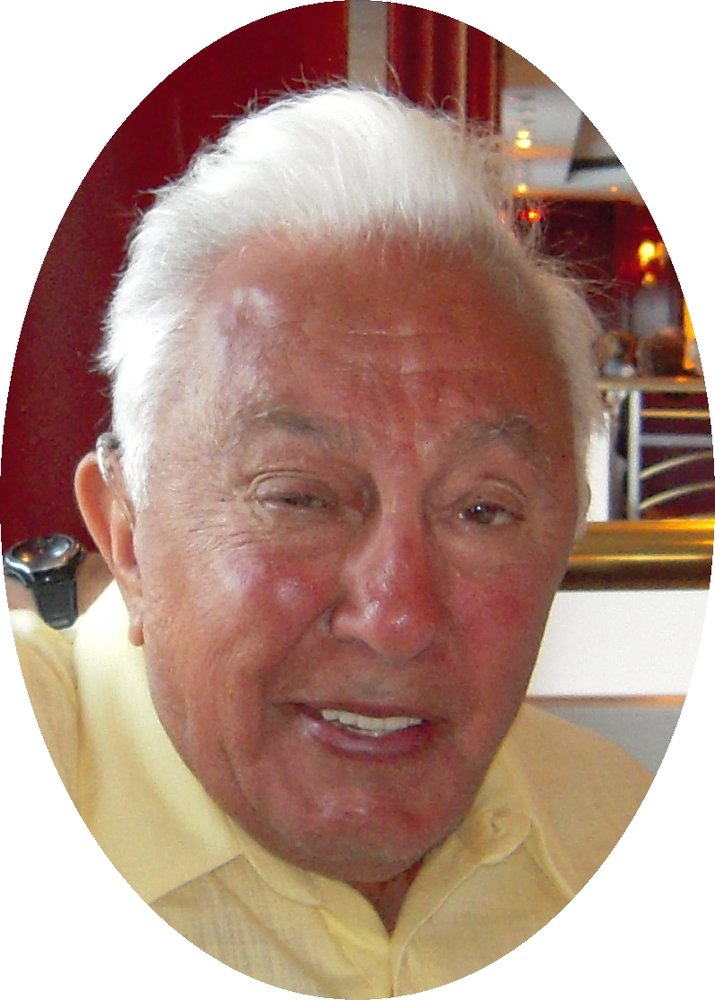 Fulton W. Sandler passed away on Thursday, October 3rd, 2019 in Cardiff, California, and will be laid to rest in Largo, Florida.On April 9th, 1923, Fulton was born in Forest Hills, New York, to Abraham and Hana Leveen Sandler. His siblings were Alva, Parke, and Malcolm; he was the youngest child and a devoted family man to the entire family.

“Rusty”, “Uncle Rusty” or “Pop Pop”, as he was affectionately known, left High School (and lied about his age) to enlist in the Army Airforce to fight in WWII. He was initially denied because of his age and being underweight, but because of his persistence, was eventually allowed to join. He served as a Navigator on a B-17 named “Bessie” and reached Second Lieutenant as a Flight Officer.  He felt a real sense of duty to his country and those affected by the war, to do something to help.  Rusty was part of the 388th Bomb Group, 562nd Bomb Squadron, 8th Airforce, 3rd Division.

On April 29th, 1944, while on a mission, his airplane was shot down, and subsequently crash landed in a small field at the edge of Holland and Belgium.  While attempting to carry out the injured from the burning plane, Rusty along with the rest of his crew, were captured by the Wehrmacht (Nazi armed forces).  Rusty and the crew were placed in a POW camp in Berlin, and the U.S. Army told his parents he was Missing In Action. In January of 1945, there was news that the Russians were coming and so Rusty and his crew as well as the other prisoners, totaling 2500 men, were forced to march through a grueling blizzard (known as “The March”) stopping at Nuremburg. At the end of 10 days, only 240 men survived. A second march began, and came to its’ final stop at a prison camp in Moosburg located in Bavaria,

Germany. He spent the month or so there sleeping in a mud puddle due to the lack of tents and beds. After defying the odds, on April 29th, 1945, a year to the day, Rusty was liberated by General Patton.

After being freed and returning to the United States, he then attended St. Lawrence University and became a member of the Sigma Pi Fraternity.  Rusty began Rectico Inc. (military packaging}, in Newark, and it moved to Cedar Grove, and then Fairfield.  He and his wife, Judith Entin Sandler of 49 1/2 years, retired to Marco Island, Florida for many years, and later, Cardiff by the Sea, California. Rusty enjoyed Marco Island with Judy and was often spending time on his boat with visiting family. A testament to his spirit and personality, he spent his 80th birthday skydiving and was ready to do it again for his 85th were it not for urging by his family that he not do that at 85.  He lived in West Orange, Cedar Grove and Englewood, NJ before moving to Marco Island, FL and then Cardiff, CA.

He will be deeply missed by Judy and his loving children, Jane, Stephen (Karen), and Scott (Sonja), as well as Judy’s children, Karen, Peter (Rachel), and Ellen.  His adoring grandchildren are Ben (Emily), Elana, Alissa, and Jenna (his birthday twin), also Daniel (Cheyenne), Max, Sam, (deceased Justin, with whom he had a special bond), Nora, Kate and Eli.

Rusty was funny, loving, provided his children with wonderful adventures, trips, and unique college care packages.  He was an extraordinary father, role model, a true gentleman and a hero.

To send flowers to the family or plant a tree in memory of Fulton Sandler, please visit Tribute Store