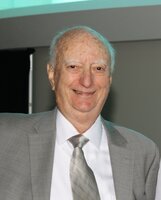 LENETT, Stuart Donald 90, of Oldsmar, FL, died October 24, 2022. Stuart is survived by his loving wife of 69 years, Joy; sons, Howard, and Blake (Wendy); grandchildren and great-grandchildren.  Born in the Bronx, New York, Stuart enlisted in the U.S. Navy after high school and served for four years during the Korean war.  He was assigned to the U.S. Naval Airforce and trained as an aviation electronics technician and radar operator at the Millington Naval Air Station in Memphis, Tennessee.  After completing his tour of duty in 1955, he attended Christian Brothers University where he graduated with a Bachelor of Science in Electrical Engineering.

Upon retirement from NASA in 1986, Stuart started his own business called Para Professionals, Inc., as a support contractor to NASA.  In 1989, he worked for a commercial company, Space Industries Inc., and in 1991 he worked for Boeing as a Systems Engineer on NASA’s Space Station until 2006.  He moved to Clearwater, Florida in 2007 to be closer to his children and grandchildren and became an active member of Congregation Beth Shalom.  In 2012 and 2021, Stuart was named the “Man of the Year” by the CBS Brotherhood.  He will be greatly missed by his family and friends.

Funeral services were held graveside on October 27, 2022 at Sylvan Abbey Memorial Park.  Donations in memory of Stuart can be made to Congregation Beth Shalom in Clearwater, Florida.