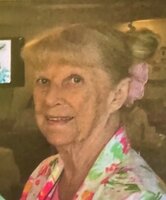 Elaine Andersen, age 83, of Treasure Island, FL passed away Thursday December 9, 2021. She was born on January 5, 1938 in Monroe, WI, the daughter of Robert and Islona Gaulke.

Elaine grew up in Algoma, WI and after graduation she attended U.W. Stevens Point. It was here where she was to meet the love of her life James (Jim) Andersen and they were married December 21, 1957. In 1960 they moved to Waunakee, WI as Jim became the band director for Waunakee High School. It was in Waunakee where they started their family and raised their 3 children, who were the most important part of their lives. Elaine was also very active in the PTA, American Cancer Drive and many other volunteer and charity organizations. Jim and Elaine also managed the Black Oaks Motel in Wisconsin Dells during the summers from 1957-1967. In 1983 they had enough of the cold winters and moved to Treasure Island, FL to enjoy the sunshine. It didn't take them long to make many new friends. Some of these friends include Cody's, Sea Hags and American Legion Post 158.

She was preceded in death by her parents, Robert and Islona Gaulke, In-laws Alfred and Edith Andersen, sons James Jr. and Jon Andersen.

No memorial service will be held at this time.