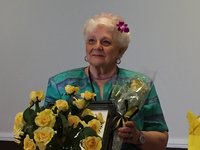 Ruth Ann Szemer, 81 of St Petersburg, FL. Went to heaven to be with our Lord on Thursday evening, October 8, surrounded by her loving family. She struggled with metastatic breast cancer for two years.

Before marriage, Ruth was a grade school teacher at St. Wendelin’s school, where she also played the organ at church. Once married, Stan and Ruth moved to Laughlin Air Force Base in Del Rio, Texas while Stan was in the Air Force, then moved back to Cleveland three years later. In November 1975, Ruth and Stan moved their family to St. Petersburg, Florida, where they settled.

Ruth was a member of Beta Sigma Phi sorority for over sixty years, where she made many memories with her “sisters”. She was a member of Order of the Eastern Star and Ladies Oriental Shrine of North America, where she supported The Shriner’s Hospitals for Children. She was a Princess in The Queen of Hearts- amongst MANY other organizations where she gave of herself through COUNTLESS volunteer hours for the benefit of others.

Ruth is survived by her husband, Dr. Stanley H. Szemer DDS, whom she has shared 60 years with. Stan & Ruth have three children, Joseph Szemer (Donna) of St. Petersburg, Michael Szemer (Nada) of Orlando  and Susan Szemer (Tom Jones) of St Petersburg. Ruth was lovingly called “Baba” by her two grandsons, Nicholas (21) and Andrew (20) Szemer of St Petersburg, both students at USF.

Ruth has stayed very close with her grade school friends from Cleveland, whom she referred to as her “Forever Friends” and chose Carol Johnson lovingly as her sister. Ruth has cousins in Cleveland, one with which she grew up with as a sister, Judy Bryk, whom was Maid of Honor in her wedding.

Ruth had a very strong personality, but was the most kind hearted woman one could ever meet. She let one know where they stood with her, but she would take the shirt off her back and offer it to one in need. One time, Ruth was asked to say what type of candy resembled her and her reply was “An M&M- Hard on the outside but soft in the middle”. Ruth always wanted to do for others, ESPECIALLY her family. She was a creative person- always making cards, artsy clothing and had a project going at all times. She was a hard worker, a faithful servant to The Lord in her Catholic Faith and a musician- playing the piano at home, and the organ at church or at her various organizations. She loved animals and they would gravitate to her- feeling her love for them. She especially loved her grand dog, Maximillian Kolby, whom she lovingly referred to as “Maxi”.

Ruth’s family is going to miss her dearly, as she was the CENTER of the family. She was the glue that kept them all together, making sure she gathered everyone together for every single holiday, where she made sure to have plenty of home-made Polish food on the table, decorations galore and card games going. She taught her children how important family is and carried on all of the Polish traditions, including polka dancing, Polish Easter egg decorating and traditional Christmas Eve dinner… singing Christmas carols together as she played piano and topping off the evening with a visit from Santa before midnight mass.

Visitation for Ruth will be held Wednesday, October 14  from 3-7pm at David C. Gross Funeral Home.

The care of Mrs. Szemer and her family has been entrusted to David C. Gross Funeral Home in St. Petersburg.