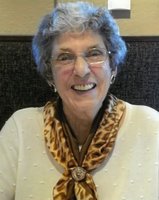 Sarah Levita Swale (Sally), of Seminole, died June 5, 2019. Born in Lebanon, Connecticut in 1934, Sally grew up on a dairy farm surrounded by her three sisters and their parents, to Morris and Helen Levita. Sally earned her BA at Eastern Connecticut University and her MA at the University of Connecticut. She taught for 25 years in Connecticut and New Jersey. She was a member of Kappa Delta Pi and Mensa.

Sally and her husband, William E. Swale (Bill) sailed to FL from CT, settled in Tierra Verde, moved to Pasadena, where they lived until Bill’s death in 2004. Sally resided at Freedom Square in Seminole until recently.

During her many years in Florida, Sally volunteered at Palms of Pasadena Hospital an d the St. Petersburg Garden Club. She was a member of the Congregation B’Nai Israel, Hadassah, St. Petersburg Sail and Power Squadron, and the Association of Retired Teachers. Sally also enjoyed sailing with her husband, tennis, calligraphy, cooking, baking, and sewing.

Donations may be made in Sally’s memory to the Congregation B’Nai Israel and Suncoast Hospice.